Get your home radon inspection in Columbus, Ohio

The deaths of Peter Jennings and Dana Reeve have raised public awareness about lung cancer. Lung cancer kills thousands of Americans every year. Smoking, radon, and second-hand smoke are the leading causes of lung cancer. Radon can cause lung cancer in people who have never smoked. Claudia Henschke, author of Lung Cancer: Myths, Facts-and Hope says that Radon which is found in soil and can seep into basements is a leading cause of lung cancer in nonsmokers.

Radon is a colorless, odorless, tasteless, and chemically inert radioactive gas. It is formed by the natural radioactive decay of uranium in rock, soil, and water. Naturally existing, low levels of uranium occur widely in Earth's crust. It can be found in all 50 states. Unless you test for it, there is no way of telling how much is present.

"Indoor radon gas is the second-leading cause of lung cancer in the United States and breathing it over prolonged periods can present a significant health risk to families all over the country. It's important to know that this treatment is completely preventable. Radon can be detected with a simple test and fixed through well-established venting techniques." January 2005

How Am I Exposed to Radon?

Radon is present in nearly all air. Everyone breathes radon in every day, usually at very low levels. However, people who inhale high levels of radon are at an increased risk of developing lung cancer. Radon can enter homes through cracks in floors, walls, or foundations, and collect indoors. It can also be released from building materials, or from water obtained from wells that contain radon. Radon levels can be higher in homes that are well insulated, tightly sealed, and/or built on uranium-rich soil. Because of their closeness to the ground, basement and first floors typically have the highest radon levels.

How many people develop lung cancer because of exposure to radon?

Cigarette smoking is the most common cause of lung cancer. Radon represents a far smaller risk for this disease, but it is the second leading cause of lung cancer in the United States. Scientists estimate that approximately 15,000 to 22,000 lung cancer deaths per year are related to radon. Although the association between radon exposure and smoking is not well understood, exposure to the combination of radon gas and cigarette smoke creates a greater risk for lung cancer than either factor alone. The majority of radon-related cancer deaths occur among smokers

How did scientists discover that radon plays a role in the development of lung cancer?

Radon was identified as a health problem when scientists noted that underground uranium miners who were exposed to it died of lung cancer at high rates. Results of miner studies have been confirmed by experimental animal studies, which show higher rates of lung tumors among rodents exposed to high radon levels.

How can people know if they have an elevated level of radon in their homes?

Testing is the only way to know if a person's home has elevated radon levels. Indoor radon levels are affected by the soil composition under and around the house and the ease with which radon enters the house. Homes that are next door to each other can have different indoor radon levels making a neighbor's test results a poor predictor of radon risk. In addition precipitation, barometric pressure, and other influences can cause radon levels to vary from month to month or day-to-day, which is why both short and long term tests are available.

Short term radon detectors measure radon levels for 2 days. Long-term tests determine the average concentration for more than 90 days. Because radon levels can vary from day to day and month to month, a long term test is a better indicator of average radon level. Both tests are relatively easy to use and inexpensive

The US Environmental Protection Agency recommends taking action to reduce radon in homes that have a radon level at or above 4 picocuries per liter (pCi/L). The costs of a radon reduction depend on the size and design of a home and the radon reduction methods that are needed. These costs typically range from $800 to%2500 with an average cost of $1200.

The average radon level in Franklin County is 9.32 pCi/L.

What can Professional Property Inspection do for me?

Professional Property Inspection can perform a short term radon test to evaluate your prospective purchase for high levels of radon. Generally, a monitor can be placed prior to the inspection in order to provide results at the time of the home inspection 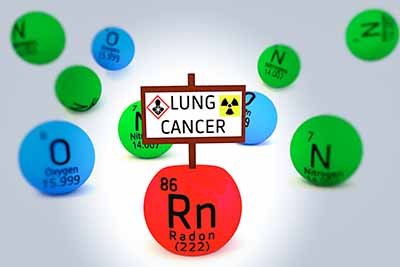